Learn theLearn how Terraform fits into the

Any infrastructure for any application

The Vault provider allows Terraform to read from, write to, and configure Hashicorp Vault.

Important Interacting with Vault from Terraform causes any secrets that you read and write to be persisted in both Terraform's state file and in any generated plan files. For any Terraform module that reads or writes Vault secrets, these files should be treated as sensitive and protected accordingly.

This provider serves two pretty-distinct use-cases, which each have their own security trade-offs and caveats that are covered in the sections that follow. Consider these carefully before using this provider within your Terraform configuration.

We recommend that you avoid placing secrets in your Terraform config or state file wherever possible, and if placed there, you take steps to reduce and manage your risk. We have created a practical guide on how to do this with our opensource versions in Best Practices for Using HashiCorp Terraform with HashiCorp Vault: 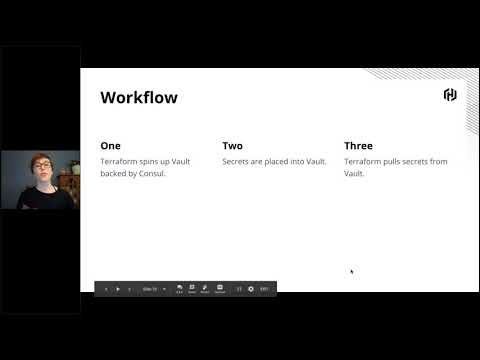 This webinar walks you through how to protect secrets when using Terraform with Vault. Additional security measures are available in paid Terraform versions as well.

Terraform can be used by the Vault administrators to configure Vault and populate it with secrets. In this case, the state and any plans associated with the configuration must be stored and communicated with care, since they will contain in cleartext any values that were written into Vault.

Currently Terraform has no mechanism to redact or protect secrets that are provided via configuration, so teams choosing to use Terraform for populating Vault secrets should pay careful attention to the notes on each resource's documentation page about how any secrets are persisted to the state and consider carefully whether such usage is compatible with their security policies.

Except as otherwise noted, the resources that write secrets into Vault are designed such that they require only the create and update capabilities on the relevant resources, so that distinct tokens can be used for reading vs. writing and thus limit the exposure of a compromised token.

Most Terraform providers require credentials to interact with a third-party service that they wrap. This provider allows such credentials to be obtained from Vault, which means that operators or systems running Terraform need only access to a suitably-privileged Vault token in order to temporarily lease the credentials for other providers.

Currently Terraform has no mechanism to redact or protect secrets that are returned via data sources, so secrets read via this provider will be persisted into the Terraform state, into any plan files, and in some cases in the console output produced while planning and applying. These artifacts must therefore all be protected accordingly.

To reduce the exposure of such secrets, the provider requests a Vault token with a relatively-short TTL (20 minutes, by default) which in turn means that where possible Vault will revoke any issued credentials after that time, but in particular it is unable to retract any static secrets such as those stored in Vault's "generic" secret backend.

The requested token TTL can be controlled by the max_lease_ttl_seconds provider argument described below. It is important to consider that Terraform reads from data sources during the plan phase and writes the result into the plan. Thus a subsequent apply will likely fail if it is run after the intermediate token has expired, due to the revocation of the secrets that are stored in the plan.

Except as otherwise noted, the resources that read secrets from Vault are designed such that they require only the read capability on the relevant resources.

The provider configuration block accepts the following arguments. In most cases it is recommended to set them via the indicated environment variables in order to keep credential information out of the configuration.

To leverage more than one namespace in Vault you can use a Terraform alias: